Last month I moved to Santa Fe after living on an isolated reservation for over 3 years.  I’m SO much happier living in an actual town, I realize I should have left Pojoaque when my first 6 month lease expired in the summer of 2017!  (I can’t call Santa Fe a city because I used to live in places like Los Angeles, Portland, and Denver.  LOL)  I am convinced that when a good medium read me in late July 2017 and said that spirit was saying, “You’re in the right church, but wrong pew…the right state, but wrong exact location” she was talking about me needing to move to Santa Fe.  Granted, Taos will always be my special place, but at this point in my life, it’s just not feasible.

Technically, I moved about 19 miles south, which doesn’t seem like that far, but the shift in how I feel and my energy is dramatic.  I thought I was the only one noticing it, but some Santa Fe astrology friends have commented that my energy has clearly changed in one month.  It’s really hard to describe the feeling difference, but it’s palpable.  I am starting to feel aligned with something.  I suspect it may cause me to make other changes in my life too.  (I’m even thinking of changing my name AGAIN…just thinking about it.)  Interestingly, this other astrology friend moved out of Santa Fe to a more remote area north of town because she couldn’t stand how strong Santa Fe’s energy was.  It bothered her.

Years ago I as sitting next to a man on a flight from Los Angeles to Albuquerque who, along with his wife, had gotten another home in Santa Fe.  (They had one in Hawaii that he also mentioned…JEALOUS!)  Up to that point, even living in Hawaii, the wife had never shown any interest in art or any artistic talent.  After being in Santa Fe for a short while, she said to him one day, “I think I want to paint.”  He kind of humored her, and supported the idea.  Anyway, out-of-the-blue, she became this fabulous artist with tons of talent!  Something about Santa Fe triggered this new creativity in her.  I’ve heard other similar stories about both Santa Fe and Taos. 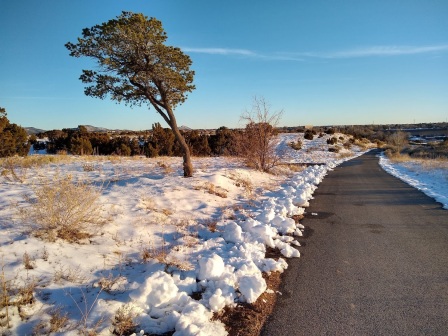 I’ve gotten into disagreements with friends regarding locations either positively, or negatively, affecting happiness over the years.  There are those clueless saps who in their Pollyanna way say, “Wherever you go, there you are.  Where you live should not impact happiness and you can be happy anywhere.”  Blah…blah…blah!  What a bunch of bunk!  There are big city people and small town people.  There are introverts and extroverts.  Just yesterday I was talking to a friend who is the opposite of me.  I’ve realized I am miserable out in the middle of nowhere, but she LOVES the idea of moving to a jungle alone with nothing to do.  I have small town friends who freak out in places like New York City.  Actually, my perfect situation…which I mostly have now…is city/town conveniences and things to do, but nature really close by.  I have a great biking/walking trail right behind my condo complex and a nice park across the street.  Plus, other hiking options are not far away…yet right down the street is a mall!  I am someone that feeds off the vitality of a place.  When I was in awesome San Francisco for my birthday in October, I was in heaven in terms of the sensory stimulation and excitement of a city where so much is going on.  And then, I was able to stand by the water and enjoy the waves crashing onto shore and watch cute seals and sea lions playing nearby.

This quick blog post has gone on longer than I planned.  My point is, if you are unhappy living where you live, “You are not a tree…MOVE.”  A different location can make a huge difference in your life.  Since we are energy and places have a certain energy, if we clash with the vibe of a place, it’s not going to be conducive to our success.  Years ago a kinesiologist in Tesuque, New Mexico was muscle testing me while I was visiting from Los Angeles.  He suddenly said that my body told him it was “nature deficient”.  That made me gasp out loud.  For MONTHS I had been saying in Los Angeles that I felt “starved for nature”.  I didn’t have the income to be able to afford to live in Laurel Canyon or one of the other more nature-filled parts of L.A. and was living surrounded by nothing but concrete and buildings.  I hated it.  But, at the close of a decade last month, I think I’ve finally found a good balance of town/nature for me…at least at this point in my journey.

I thought I would attempt some channeling today before heading off to a yoga class with the fabulous Jessamyn Stanley, and, thankfully…The Ancient Ones showed up!  They talked about reintegrating ALL aspects of who we are.

I really do need to get a real video camera (am just using a regular Canon camera) and video editing software.  If you want to fast forward to 2:55, you can skip me getting into trance…which isn’t terribly eventful.

Howdy!  I made the trek down to Albuquerque this morning to attend friends’ of mine’s new-ish monthly group called Mystical Life Forum of New Mexico.  The monthly event is on the 4th Saturday of each month, from 9:30 a.m. – 11:30 a.m. and I highly recommend it to anyone in the Albuquerque area.  Hannah and her mom, Mary, are fellow contactees, and spread as much information as they can about all things metaphysical.  They also have a new book coming out with matching ET tarot cards, which look freaking awesome!  They will be doing a book signing at my friend, Mitch Rubin’s, fabulous metaphysical store named Blue Eagle Metaphysical Emporium on September 30th from 11:00 a.m. – 2:00 p.m.

The guest speaker today at Mystical Life Forum of New Mexico was a lovely soul who goes by the name Bethany Paix in this life.  She is a very knowledgeable and experienced Master Energy Channel who does spiritual clearing and blessing for people, places, and businesses.  Her website is Angels Helping Humans.  As a psychic medium, I feel people’s energy immediately, and I am very comfortable about recommending her services.

Today’s drive down to a major city (in terms of population, not actual city amenities…don’t get me started on the lack of IKEA) was very eye opening…upsettingly so!  I live on a reservation in the middle of nowhere and the biggest city I’ve been going to since last November when I moved back to New Mexico for the 3rd time (yes, I’m one of THOSE people) is Santa Fe…with a population of 83,875 (as of 2016).  As of the year 2000, where I live has a population of 1,261.  Unless someone died, that’s now 1,262.  Anyway, from the moment I hit Albuquerque’s (a.k.a. highest crime in the USA…or close to being #1) city limits, I felt stressful, not good energy.  But, I made it to this morning’s talk and then stopped by Blue Eagle and then Coronado Center, since I truly do miss REAL shopping malls (Santa Fe’s idea of a shopping mall is pretty darn pitiful).  Inside the mall, I Instagrammed my glee about being in a real mall…but that quickly faded the moment I stepped outside.  I exited the mall from the total opposite side from where my car was parked because I started to feel overwhelmed with lots of people’s junk energy.  One of the many reasons I left Los Angeles in 2008 was that, as a very empathic psychic medium, I felt bombarded with 13,000,000 people’s energy and I couldn’t take it anymore.  Anyway, on this hot summer day (it really is cooler where I live…thank goddess) I had to walk all the way around the mall on the outside, which gave me “great” viewing/hearing of Burque people’s lives.  OMG!  It was nonstop fights and screaming and yelling and road rage in the parking lot!  At one point, this Nissan Maxima driver and Ford Mustang driver were so livid, I got scared there’d be a shooting and started to look for a safe place to duck!  I’ll give you a hint…the Nissan driver or passenger got out of his car.  The overall vibe in Albuquerque was VERY angry and scary.  Walking past this woman and a kid, she said to the kid, “Albuquerque is very prickly today.”  I commented to her as she passed, “Yes it is!”  There was overwhelming stress and rage that carried over to Old Town Albuquerque…which normally I enjoy.  I did hang out there for a while and took a lot of Instagram pictures, but was EAGER to get out and get back to the rez!

It was interesting that as I stopped by a nice, new Starbucks on Rio Grande just south of the 40, as I mentioned where I live and big cities vs. small towns…the barista said to me, “I didn’t miss big cities at all when I left.”  At the mall, I literally Intagrammed, “I can’t move to tiny Taos.  I need real shopping malls!”  But, now at PEACEFUL home on he rez, I think I cannot even CONSIDER moving back to insanely priced and congested Los Angeles like I’ve been thinking of doing.  Something deep within me has changed and I need small town life with lots of nature and QUIET.  I’m pissed about this, FYI.  I have known for a while that it’s my EGO that needs glitzy city.  My soul needs Taos…or at least some beautiful place that is full of nature and calm like Taos.  As much as my ego LOVED Denver last year…my guides made sure it didn’t work out.  My guides can be highly annoying.  They are all about the soul instead of ego.  The issue is that they aren’t down here on Earth in this 3D world dealing with what we need to deal with.  They are up there at some higher, more evolved, “big picture” dimension, and it’s not fair!  Pffffft! ;-P

Go to http://attunedvibrations.com/free-healing-tones/ to download healing tones for free!  I was talking to a new friend on Sunday about sound/tonal healing as I suffer with chronic pain and she sent me this link.  If you’ve ever been lucky enough to be in the same room with Tibetan monks as they do that powerful 5 tone chanting, you know sound is a powerful healer!