I thought I would attempt some channeling today before heading off to a yoga class with the fabulous Jessamyn Stanley, and, thankfully…The Ancient Ones showed up!  They talked about reintegrating ALL aspects of who we are.

I really do need to get a real video camera (am just using a regular Canon camera) and video editing software.  If you want to fast forward to 2:55, you can skip me getting into trance…which isn’t terribly eventful.

I stupidly decided to drive up to very snowy Los Alamos today to check my PO Box since December 21, 2018 was the last time I was able to get my mail and I knew SAG-AFTRA Awards DVDs were waiting for me…along with a jury questionnaire.  (Yuck regarding the jury summons.)  New Mexico has been slammed with 3 snow storms since Christmas and Los Alamos got 2 feet of snow with just ONE of the storms.

Anyway, along the drive there, I took some videos and stopped at a popular overlook to snap a few pictures of a pretty canyon view.  Now, that pullout spot was snowy but “okay’ and Ruby, my 2015 Honda Fit, handled it decently.  I got back onto Highway 502 and continued up the mountain.  Then I impulsively decided to whip into this smaller scenic overlook pullout area…but the moment I did, I thought, “Uh Oh…This isn’t good.”  The snow was deeper than it looked and Ruby got totally stuck. 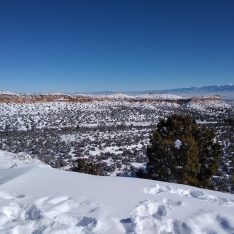 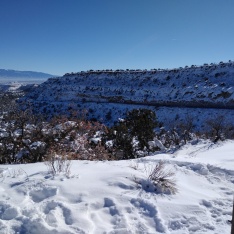 (Here are 3 pictures from the bigger, popular scenic overlook spot…before I got stuck a bit further up the mountain.  You can see how pretty it is, which is why I couldn’t resist.)

I hadn’t been there long… trying to dig out Ruby’s wheels, cursing, spinning her wheels helplessly, etc. when this guy showed up in a white pick-up truck to help me get out of the predicament I’d gotten myself into.  He pulled up behind us.  (He was about my age and very attractive, I must say.) The good Samaritan went right to work and between him digging some more, me rocking the car forward and backward, and him pushing Ruby’s butt, we were able to get her front wheels to finally gain traction so that I could get back onto the paved highway.  Because that part of 502 is narrow without much between traffic and falling thousands of feet down a cliff, once Ruby got traction and I could pull out…I had to GO.  I couldn’t sit in the road to ask the guy for his name and address so I could send him a gift to thank him.  I just had to quickly wave and take off as a big truck was coming.  But, once I got to a much wider part of the highway, I pulled over waiting for him to come up 502 in his white truck.  I had planned on waving him down and then getting his info.  Well, there are only two options on that part of Highway 502…up the mountain or down the mountain.  There aren’t side streets or other routes.  I waited and waited and waited but he never showed up!  I’m like, “Where the heck did he go?”  Granted, he COULD have gone down the mountain, but I think he’d been heading up like I was.  He just disappeared!

I’ll never know for sure if he was just a nice guy helping a lady in distress, or if he was an angel in disguise, but I kind of like thinking he was sent by my Unseen Friends. 🙂

Here’s a video as I headed back down the mountain showing where Ruby had been stuck earlier.  If I had to call a tow truck, it would have been VERY hard to maneuver on that narrow stretch of road…so my angel in a pick-up truly saved the day!